skip to main | skip to sidebar

Above; the mighty Moa, a near miss of 600 years from modern science and also an example of the restrictions imposed by its flying ancestors. The arms of its flying ancestors had become so modified for flight that on the ground they had no use. In Dinornis and other Moa birds the forelimbs were completely lost.

The idea that Dromaeosaurs may be early neoflightless birds has not been much accepted by many, but I believe that there is not enough evidence to disprove this idea and in fact, that their is much to the contrary. In this post I will look at the theory behind the possibility of there being Neoflightless birds close to Archaeopteryx and the base of the bird family tree.
I will approach this post in a logical yet hypothetical way. Many modern birds are flightless. The majority of more basal Palaeognathous birds consist of a group called the Ratites. All of these are flightless animals with a limited range of ecological diversity which has been most restrained by their specializations towards flying. For example their manual digits have fused to form a strong support for flight feathers; hampering their use in ground locomotion and food gathering. Such limitations have made the Ratites a rather undisparate group of small headed plant eaters (with the exception of the adorable kiwi). 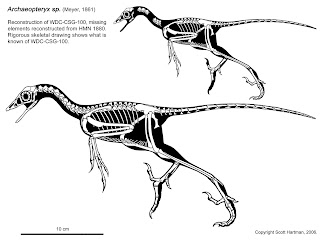 The ecological limitations created by features inherited from the specialised flying ancestors of the Ratites may not have been the case in more primitive Archaeopterygian grade birds. At this stage in their evolution the birds still retained many of their ground dwelling ancestors characteristics. For example a balancing tail, teeth for processing food and fingers that could still be used to grab prey. Another thing to point out is the fact that at this early stage in the development of birds, flight was most probably a rather awkward and comparatively clumsy not to mention inefficient affair. Therefore when given the chance selective pressures may be more likely to cause flightlesness in primitive Archaeopteryx type birds than in the highly specialised Neornithes. The fact that Neornithes have become flightless makes the probability of a primitive Jurassic bird evolving into flightless forms even more likely.
So were the Dromaeosaurs these Neoflightless Protobirds? Find out in the next installment!
Idea sourced from Dinosaurs of the Air by Greg Paul.
Posted by James at 12:42

James
I am an A level student in the dissapointingly unfossiliferous county of Cornwall. I have an interest in palaeontology and zoology; and hope that this blog will help to inform people and promote discussion(comments welcome)on this subject area. I previousley blogged on Jurassic Albatross; this blog contains some old stuff which I dont aggree with any more; you are welcome to have a look.